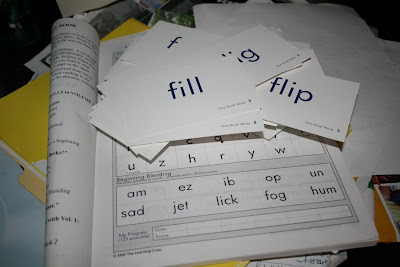 There is a box with a bunch of flash cards in it. It was from when Dalton was in kindergarten. Shelby breaks in to the box. I catch her knee-deep in flash cards on the floor of her room. I reprimand her for getting it all out, and making such a mess. She asks if we can do them. I tell her, as I clean it all up, that we can do them another time. As I sit on the couch with Garrett, feeding him his bottle, she brings in the box and lays it on the couch. Then she gets out one of the packs. It is a hard one, so I put it back. "Let's do this one," I say. It has all the letters on it. She whips through it in a heartbeat. Then she sees a workbook, and asks to do it. Again, I am thinking that it's too hard. There is a part where you say the sounds of the letters. So, she does that again. At the bottom of the page are two and three letter combinations:


She does them all.

The next line is trickier: 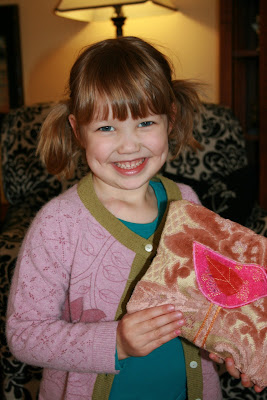 She has broken the code. The strange markings now have meaning. A whole new world has opened up. We run in to show Dad and Dalton, who are reading Harry Potter on Dad's bed. "Look guys, Shelby has something she wants to show you." And Shelby reads word after word for them. Messing up on those nasty mirror-image b's and d's. (Those things really are tricky.) Oh, and sometimes saying "Shhh" for H instead or "Huh"...but really, it was amazing! "t-a-g", "l-i-c-k", "f-o-g", "h-u-m". Dalton and Dad look up to check the card after she says each word, and sure enough- she's right. Then Dalton wants to help her. But she will have NONE OF THAT, thank you very much. She can do it by herself. She goes on for about another minute, knocking the socks off all of us. And then Garrett gets stuck in my ab machine (piece of crap) on the floor, so the fun has to end. Dalton gives Shelby many big hugs, and we decide that we might need to go to Fairmont Pool this weekend as a family to celebrate that Shelby can read "and that I can read Harry Potter!" Dalton adds. "It's like a 5th grade book, you know!" "Yes, I know Dalton. You are super smart. You are both such good readers."

Go Shelby, that is so exciting. Jocelyn actually had a similar experience this week too, it is just hard to believe cause chandler still struggles. Anyhow when can dalton come stay with us, we are dying to see him...let me know