So, I send Dalton off to school this morning, forgetting that it's April Fool's Day. Maybe the reason I forgot is that it looks more like the first of January, than the first of April outside. Good thing I still haven't gotten around to taking our homemade snowflakes off the windows. People might have thought it was Spring. 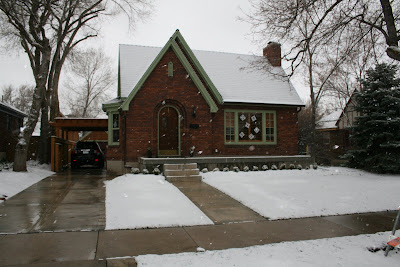 Last year I got Dalton good. He had green milk in his cereal. I glued quarters to the sidewalk, so when he and his buddies walked home and saw them, they tried to pick them up unsuccessfully. Later, I told him that we'd been to the doctor's and they told me that the boy baby inside me had turned in to a girl. So he would be getting another sister, instead of a brother. At this news he fell on the floor and began to cry. I had to immediately yell, "April Fool's" over and over. He was relieved, to say the least. (Geez, he really did want a brother!) Unfortunately, Shelby also overheard it all, and was too little too understand what April Fool's was, so for the next week she went around telling people that we were having a baby girl instead of a baby boy. She was thrilled! It was a little harder to break the news to her. I told Dalton that the Principal had called to say that he was behaving badly at school. I switched out his sour cream, for whipping cream. By the end of the day he was saying, "After today you can't do April Fool's anymore, right?" Translation: mom no more tricking me, and lying to me. So, this year Shelby and I are brainstorming after he leaves the house. I have decided to let her in on it with me. She's crafty, and I need her help. "Let's tell Dalton that his DS got dropped in the toilet, and is broken," I say. "Yeah, and let's tell him that Garrett flushed the toilet! AND let's tell him that his Pokemon cards got flushed down the toilet, AND he has to move to another family!" I can see the little wheels in her head turning...she's on a roll. "AND let's tell him that Gecky died, (she goes in to the gory details), ohhh and Amigo died for April Fool." "Let's tell Dad that Garrett dropped his Itouch in the toilet," I say. I tell her what to say to Dad, and have her practice it one me. Again, this is rocking her world, her Mom having her practice a lie to tell to her Dad. Oh well, all in the name of a good ol' fashion worthless holiday! So, I am in rocking the baby to sleep for his morning nap, when Gavin rushes in. "Garrett dropped my Itouch in the toilet!?" He looks panicked. I nod. He closes the door and I hear Shelby say, "What did she say?" After I'd laid the baby down I joined them in my room, where he was studying his Itouch, to see what the damage was. Shelby looked at me, beaming with delight. Oh, the joys of lying to your parents! We yelled, "April Fool's!" "Oh, good one." Gavin replied, sighing with relief. Then he got in on the sinister schemes of how we could get Dalton good. So, we are still throwing different ideas around. I think I am going to glue some cheese and crackers to a plate for Gavin. He won't be able to resist that. I may text my Mom and tell her I'm pregnant. Although she'd probably go in to depression when she found out it was a joke. Maybe I will tell her we have to move back to Boston. What a silly day. I wonder what the origins are. Regardless, it seems like a day that is meant for kids- when one's imagination rules. And we plan to have some fun with it in this house!
Update: the kids are in bed now so I can report on what pranks were pulled. Dalton put rice inside a Cadbury Egg wrapper and gave it to Shelby for a treat. She was quite shocked when orzo pasta came spilling out of the shiny foil. After Dalton was done laughing he gave her the real egg.
Shelby got him back by throwing a "pee pee" diaper on him, that was really soaked with warm water.
But mine took the cake. I was changing the baby's diaper, and I asked Dalton to help me. I showed him the diaper (that I had previously filled with Dinty Moore beef stew) and asked him what it smelt like. I said that the Doctor said to check it because of the medication the baby was on for his ear infection. He reluctantly sniffed it. I smelled it too. Then I held it really close to my nose, and began to lick it. I then took a bite of the "poop". He nearly died. He backed in to the corner and ran out of the room, yelling for Gavin that "Mom ate Garrett's poop". Shelby was the one to tell him it was April Fool's.
Shelby did tell me during the day that she'd wet her pants, and cut her finger. Both for April Fool's.
It was a fun day. No fooling there.

That is hilarious! The day went by in a blur for us and we didn't do a thing--so sad. Thanks for the good ideas for next year.