I keep some things hidden. Don't we all? And some things should stay hidden...right? Like my need to sing along to Alison Kraus, feel better by crying at a movie, and make list upon list upon list. But right now I feel like junk, and I will admit a few things to the world...just for my own therapy.


I was volunteering at the Elementary School library. A girl was being loud and well, of course that won't do. Who does she think she is anyways? The librarian was reading to a group of students. And this girl was just gabbing about with her friends. The nerve! So, I asked her to quiet down. And she didn't. In fact I think her volume went up. "What the?!" So I went back and asked again. And again, the talking. So, I went over a third time, looked her right in the face and said "What is your name?" "Why?" she asked. (Again, I am shocked! I am used to dealing with seven-year-olds who would wet their pants if a school worker asked them their name.) So I say, with as much I am a PROFESSIONAL-non-paid-school-volunteer-attitude as I can muster "Because I am an adult and I am asking you your name." Nothing. She gives me the blank stare that I get from Shelby when she is trying to drive me up the wall. "Okay, what is your teacher's name?" Nothing. "You know that I have been AUTHORIZED to hand out disciplinary slips, right?" and then it comes out...her name. It was foreign. And I can't even remember it now. But she said it with such hurt, that I was stunned. Like I had broken her. So, I didn't feel like I had won my little duel with the bratty 5th grader. I just felt like a bully. And then they quietly left, her and her friends. So, I asked the librarian about the situation. "You were right to do it," she said. "That behavior is unacceptable in the Library and students know better." "Yeah, right on. I WAS right." "What was her name?" " I don't know, I can't remember. Something foreign." And then her face fell. "Was it Ada?" (I truly can not remember the girl's name so I am making her name up) "YES! That's it." "Oh... she was adopted a few years ago from a Russian orphanage...her and her older brother. Her life was very bad. She was hungry. They were very bad to her. She has had a lot of problems here at school, and her brother has even more problems...but...she should not talk loud in the library." And I almost weep for this girl, right there in the school library. This sweet, chattering, bright girl gets cut down to size by me. After all she has been through, and having a "different name"...no wonder she was not comfortable telling it to me when I asked. Because she didn't have a name like Lila, or Grace, or one of the other uber-trendy white names. And so I just felt miserable for the rest of the day. I wanted to find her. Tell her that I was sorry. Tell her that she obviously has a big heart, and a wonderful personality. Tell her that the sky is the limit for her, and that she deserves the best. (of course, I know that by me: the geek/rude/lame adult saying this it would immediately discount all of it) So, That was yesterday.

And then today I find out that my neighbor killed himself. He had a shitty life. Sorry, but he did. His mother had just died earlier this year, suddenly. He had had trials in his childhood that you wouldn't wish on your worst enemy. He was in his twenties. And when she died, he sold her house and moved away. Can't say I was sorry to see him go. He wasn't "our type" here in the neighborhood. He drove a motorcycle. Shaved his head, had tattoos. He smoked. He was heavy. And then there was his past. That damned shadow that followed him everywhere he went. The years I knew him, his mother tried to rid him of it...show him his true self-worth. She reminded me of the statue of Mary, holding Jesus. Just this Mother Bear, wanting nothing but for the world to be nice to her son. 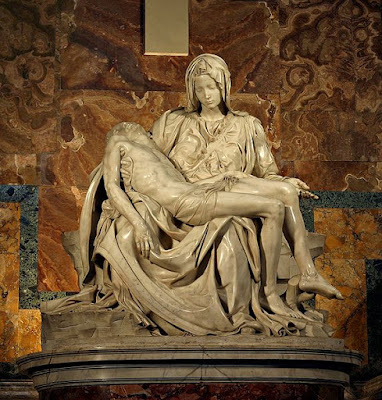 But he couldn't shake it. And the neighbors talked, they whispered..."He's served time, you know he could be dangerous!" Even though every time you saw him, he offered you nothing but a shy wave and kept to himself. And so he left. And you forgot all about him. But now he is really gone. And just like that Russian girl, you wonder if a few acts of kindness, instead of the "deserved" acts of justice would have made a difference. He'd lost his one ally in this world- his mother.
Loneliness is deadly.

And so, I have some BAAAD karma. Not that I think I am the soul cause of the pain around me...but am I part of the cure, or the disease? I once overheard my local nursery owner tell a woman, who was puzzled as to why her plant had SUDDENLY died, "Mam, Just because it looked like it was living, doesn't mean it was. It wasn't living, it was just slowly dying." And that was my neighbor...and maybe this little Russian girl.

So, what am I doing to help? Letting a little sunshine in? Giving a little sustenance? Offering support? Tomorrow...I start tomorrow.

K, that post pretty much makes me want to cry. I've done that before, too, acted impulsively and then later found out circumstances that made me feel even more atrocious. Thank heaven (literally) for another day and repentance, right?

That really opened my eyes and reminded me that the worth of souls is great. I don't know why it is so easy for me to forget that.

I love you. You've helped me. There...one person you can add to the list you'll make tomorrow of ways to be a better person. You've already succeeded.

Oh the people I've pre-judged....and only a few I've been able to really get to know.....and make ammends. There has to be redemtion in this life...there HAS to be.

I know this was a hard lesson for you to face....but thank you for sharing because I needed a refresher course too. I was looking at my sweet boy in the tub tonight. I thought...My grandpa was someone's sweet child. Then I thought, everyone is someone's sweet child at some point.....why can't I treat them that way? The way Mary begged the world...the way I beg the world to treat my son.
Thank you Ashley!

Tell her that my middle name is Ada and it's the coolest name in the world. I'm proud to have that name and she should be too.

It's hard sometimes to remember to think of someone the way we should. I'll never forget when Christian returned from his mission, so much older and kinder. He served in Kentucky with people that didn't have much money, no education and a pretty unclean lifestyle (literally). I will never forget what he said helped him remember that they are children of God. He said, "I always imagine them standing in white clothes in the temple and then they become who I know they can be with the Gospel in their lives." That's a pretty good example.