UPDATE on the former pirhana and his mother 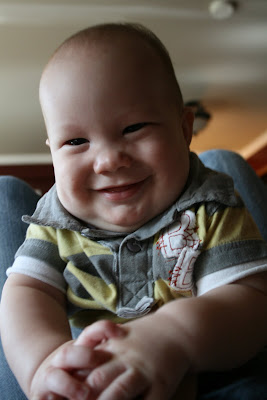 I gave it up. I threw in the towel. And thank goodness. Not a moment too soon. Garrett is five months old. I just took him in for his four month check up (I know..a little late...oops) where he weighed in at 20 pounds! (well, 19 lbs 10 oz, but who's counting?) The size of a one-year old! He is also off the charts for height. (well, 96th percentile, so technically- still on the charts). Can you tell that I am feeling proud? I have no reason to...not like I have done anything to make him a tall child. In fact I have some munchkinish recessive genes on my side of the family, that I am just glad did not manifest in any of my kids...so far. But, I am happy that he is thriving. I was worried that when I stopped breast feeding he would shrivel up and wilt away, all thanks to the lack of white blood cells and a bunch of other healthy goo that he was now being denied. But it seems like all that corn syrup and vegetable oils are really agreeing with him! (wink, wink) 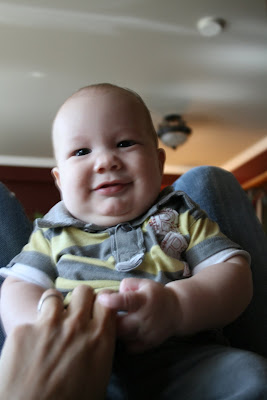 Now of course, I wish that I could have breast fed until he was one, I really do. But I couldn't. He was starting to teeth. And let's just say that there was a part of my body (2 of them) which I am fond of, that was starting to resemble hamburger meat. I could not be a chew toy and survive emotionally. So, I weaned him slowly, until I was down to one feeding a day. I had also “furberized” him

(definition:let him cry himself to sleep for a few days
whilst hating myself for being so cruel to inflict that kind of torture on him
even though I knew that he was (A) full, (B) changed, (C) burped and (D)
tired beyond belief... oh and (E) that I was so flippin tired, if I held him any longer he was in danger of being dropped or smooshed by me...with each minute of crying feeling like an eternity, each second wondering if he might have some life-threatening illness that I might be ignoring, causing him to die in his crib, etc...*)

*of course, now his face (yes- admission: I lay him to sleep on his stomach) hits the crib sheet and he is out in 30 seconds or less...so DEFINITELY worth the few nights of torturous hell.

...SOOO he was not eating at night any more. I thought that giving up that last feeding would be death. That I would A.) get a breast infection from being engorged. B.) Be devastated at not having that “bonding time” anymore, and C.) Feel like crap...oh and D.) My baby would not be healthy, happy, or normal. Soooo, I was surprised that none of the above happened! I did not get a breast infection, unlike with my other two kids. I was not devastated because, guess what- I still got to feed him a bunch, and it still makes me feel happy to see him drinking a bottle. I don't feel like crap. My body has healed...hallelujah! And according to the doctor...he is THRIVING! Yeah. 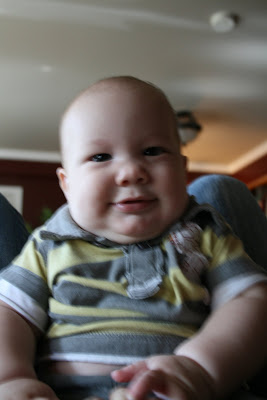 Okay, there were a few downsides to weaning, that I had forgotten about. Number one- my period. 'Nough said...YUCK! Number two- I am shedding! Why does a nursing mother get to have thick shiny hair while the bottle feeding mom gets thin stringy hair? (God's wrath maybe??) Don't get it, but I am vacuuming up giant hairballs of mine..YUCK again! Number three-No more eating like a pig without gaining a pound. Yep, I am now eating for only one again, and so...portion control. On the upside- I like sex again. And, the kids can feed him, which they love. And I can go to the Jazz game this weekend and not have to pump in the gross bathroom because I am engorged! AND I get to eat whatever I want and not worry about some spicy Indian or Middle Eastern dish keeping him up all night. Yeah! Plus, I feel happy...priceless. So, it was not in the cards for me to nurse this guy till he was one. But you know what- he's happy, I'm happy, so it's “all good”! Oh, and as a side note, his pediatrician said “You know, babies like this don't come around often” (speaking about what a good-natured, happy baby he is) AND he said “You notice how his toes have a propensity to turn inward? Well, most Olympic sprinters have the same stance.” So, I'm not saying that Garrett is going to be wildly successful in life as well as an Olympic hero...but you never know! 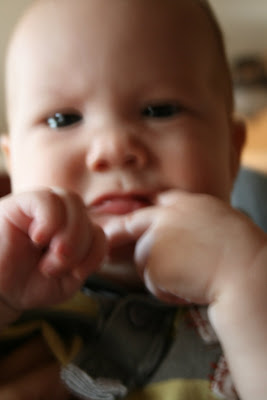 No one writes it like you do Ashley!!! I love the truth and honesty and THANK HEAVENS for the invention of formula- when it's time to let go Im just glad for the back-up. He is a strong and thriving little one and Im so glad I got to meet him in person. He is just as cute!

Your kids are just the cutest! We will have to have you over at Christmas time when Danielle and her crew are in town!

There is no question that he for sure is going to be famous, handsome, smart, funny and perfect in everyway! Can you tell I'm the obsessive aunt! I seriously wish he was mine! :)

Thanks Lis, it was super fun to see you guys!

Nicole, I would love to see Danielle and her family over the holidays!

Kris, thanks for being such a good Aunt!

HE IS SO ADORABLE and looks just like his Mama!!!

I cannot get over chubby-wubby. He looks like Dalton as a baby but on intravenous cream 24/7. Nothing better than a puffy baby.

Ashley, I would love to get together with you when we're in town! We fly in on the 25th and leave Jan. 7th. Let me know what dates work for you, our schedule is pretty flexible.